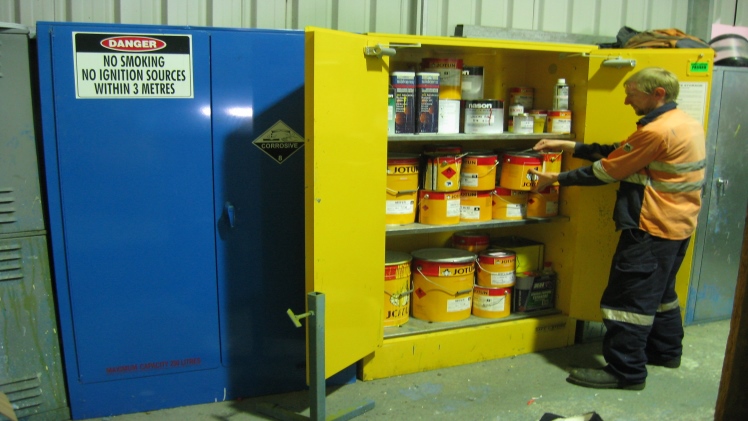 While flammable liquids are a safety hazard, the majority of them are essential to your home’s maintenance and functionality. Chances are that the majority of homes have in storage:

Are they a safety hazard? Of course! However, do you have the alternative to keeping cooking oil, butter, or lard in your home? Will you just throw out all your rubbing alcohol just because, in the case of a fire, it might make the situation worse? Of course not!

Instead, you need to learn how to store them safely and properly. With that in mind and without further ado, here are some dos and don’ts of storage for flammable liquids at home.

When it comes to the storage of flammable liquids, you just can’t afford to make any compromises. Here are a few tips to help you set this straight.

It’s generally a good idea to restrict these flammable items to a single (secure) location and then make the rest of that location as fire-resistant as possible. The cabinet where it’s stored should be from a fire-resistant material, the surroundings shouldn’t contain other flammable materials, and the walls should be coated in fire-resistant paints.

Now, in an ideal scenario, you would fireproof your entire home. This way, the risk of storing flammable liquids (even improperly) goes down quite drastically.

Contrary to popular belief, it is not necessary for a cabinet containing flammable liquids to be ventilated. Truth be told, without oxygen, there is no fire, which is why the vent probably needs to be protected. So, if there are ventilation openings, they should be sealed with materials that provide fire protection. Most importantly, flash arrestors need to be installed at both ends of the cabinet. One opening is, therefore, used for the vent, while the other is used for the incoming clean air.

Keep in mind, nonetheless, that these are the conditions and requirements that are just too demanding for private residential properties.

The most important thing to remember is that the sooner you detect the flame, the better the response. So, make sure that the smoke detector is near the storage for your flammable liquids. It’s also helpful to have an extinguisher nearby.

Most importantly, just having a smoke detector and fire extinguisher is not enough. They need to be fully loaded and their expiry date needs to be checked out. Also, it’s essential that you know how to operate them, replace batteries, and recognize if the detector is not operational.

Your care for these flammable liquids doesn’t end when the bottle is empty. Chances are that there is still some residue, so what if you just toss it into a trash can and, a couple of hours later, you forget about this and then toss a freshly extinguished match into the same can? Paying close attention to how you dispose of these liquids and their containers is incredibly important.

Keep them out of the reach of children

The majority of these liquids are toxic, which is why you don’t want your kids to be able to reach them even if you don’t fear them starting a fire. So, ideally, you would either keep the cabinet locked or keep it up high. The latter is more convenient, but the former is somewhat safer.

Moreover, in the introduction, we’ve mentioned the list of liquids that you probably have in your household. The truth is that none of these are items that you’ll need on a second’s notice. Also, if it does catch flame, the last thing you want to do is open the cabinet to remove the items. In other words, it’s completely fine if you need a bit more time to reach or open/unlock the cabinet.

Then, there are some mistakes that you could be making without even realizing how bad they are.

Previously, we’ve talked about storing them out of the reach of children. Well, a lot of people solve this by hiding them. However, far from sight far from heart, which means that it might not be long until you forget about them, as well. If you don’t know they’re there, you won’t remember to be careful around them. So, make sure not to hide and forget these flammable liquids.

Keeping them close to the flame source

When it comes to cooking oils, it seems intuitive to keep them near the stove. Now, near the stove doesn’t mean next to it or above it. Just make sure it’s not in a position from which it can be tipped onto a hot stove.

When it comes to the rest, it’s pretty easy to keep them away from the flame source. After all, there are not too many heat sources in your house. Ideally, some of these liquids can be kept in a garage, which is why the way it’s constructed makes a lot of difference.

Don’t store them in improvised packages

Another thing you need to remember is that keeping them in improvised packages tends to be a pretty bad idea. After all, their package is designed to be fire-resistant. Well, if you choose to pour them over into a more elegant container, you shouldn’t be surprised if that container doesn’t have flame-resistant properties.

What to Do if They Catch Fire

Even with all your care, these liquids may catch fire. Now, depending on the situation, you either want to extinguish or evacuate. Generally speaking, CO2 fire extinguishers are safe for use on flammable liquids. However, they are not good for wood, paper, or fabric fire.

Also, CO2 extinguishers are not suitable for cooking fires (especially those involving oil and grease). Always bear this in mind, or you risk blasting the flame into surrounding areas, as well, thus making the situation worse.

The truth is that once you examine the list of flammable liquids, you’ll realize that you simply need to have them in your household and that there’s no way around it. the only thing you can do is learn how to properly store them. So, to make the long story short, knowing which items are flammable and storing them properly is the No.1 priority for any responsible homeowner.

What should you do first when a tree falls on a commercial property?